The story of the German gentleman chasing a wild boar that had snatched his bag brought to mind (quite naturally) the court's decision in Rochford Construction Limited v. Kilhan Construction Limited (12 March 2020). The link? That fact that both arise from an act of 'smash & grab' and are quite interesting in their own unique way.

The parties' sub-contract was for the construction of a reinforced concrete frame for Richmond upon Thames College.  As is not uncommon in the construction sector, the parties fell out over money. In this case, they fell out over interim payment application no. 9 ('IPA 9') because Rochford claimed it was never due and owing to Kilhan.

The application, which was for £1.4m, was dated 20 May 2019 for the period ending 30 April. The corresponding Payment Notice for £1.2m was issued on 23 October 2019.  The dispute concerned the validity of the Payment Notice, i.e. was it issued late and did it fail to specify how the sum was calculated? This dispute was duly sent off to adjudication. The adjudicator's decision was that the 'due date' was 20 May 2019, the 'final date' for payment was 30 April, the Payment Notice was late and no 'pay less' notice had been served. Hence this was, in effect, a 'smash & grab' adjudication and Kilhan was entitled to the sum claimed.

Rochford paid Kilhan but only after Kilhan had issued enforcement proceedings. Typical, some might say.

But Rochford was unhappy and sought declarations from the court as to the validity of the Payment Notice of 23 October 2019 together with the repayment.

Well, Rochford lost because a 'construction contract' has to have a 'due date' and 'final date' for payment, i.e. each party needs to know when these are because they, amongst other things, determine by when other notices (such as a 'pay less' one) must be given.  As we all know, to the extent that the parties' construction contract fails to include such dates, the statutory Scheme will step in. In this respect, the Scheme does not (in contrast to the adjudication process) replace wholesale what the parties have or have not agreed but rather 'plugs' any gaps.

The judge also observed that there was no intent behind section 110 of the 'Construction Act 1996' (as amended) to peg final payment to a 'floating  event', such as the issue of a valid VAT invoice, as opposed to a fixed period.  The statutory intent was to place limits on the payer's ability to control the payment process. In this case, Rochford had stepped outside those limits.

Consequence of the lack of clarity

Due to the lack of clarity in the sub-contract, Kilhan could keep the money and, one suspects, Rochford's financial pain was increased by way of a bill for Kilhan's legal costs.

In 'stark' (pun intended) contrast to Rochford, it is reported that the naked German gentleman successfully recovered his clothes and laptop. The wild boar's case of smash & grab may have failed, but at least it gave the rest of the picnickers something to talk about over their Frankfurter and pickle.

Berliners attempting to cool off at one of the city’s lakes this week were treated to the spectacle of a portly naked man giving chase to a pig. 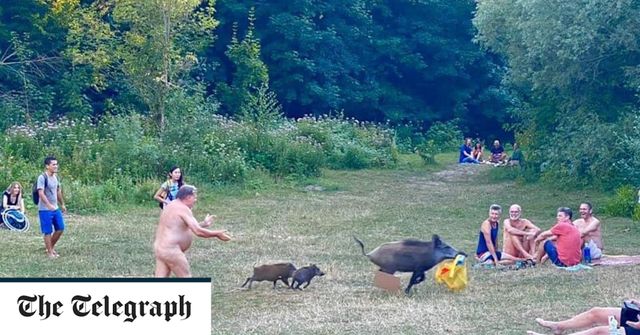 A nude bather gave chase after a wild boar ran off with his clothes https://t.co/2wGnx3tjh0