There is a joke that goes, "what is the difference between God and an adjudicator?". Answer: "God knows he is not an adjudicator".

It is a joke that can be applied to many situations and John Bolton, formerly President Donald Trump's national security adviser, may be using it in a different context. The joke is also relevant to a recent case on natural justice in construction adjudications, namely Corebuild Limited v. Mr Tom Cleaver and Another (7 August 2019).

Adjudicators - who are they?

Adjudicators are individuals and a fine (albeit limited) group of people they are. They do a job that can, at times, be rather difficult. They must, for example, reach a decision on a dispute within a relatively short period of time. They may also be the recipient of some unhelpful correspondence both before and after they have reached their decision.

The job of an adjudicator is, however, a powerful one because their decision is binding, i.e. the parties must comply with it.  Therefore, when an adjudicator decides Party A is to pay Party B £1m Party A has to pay even if, on closer examination, Party B is not entitled to the £1m. In theory, any error by the adjudicator is a matter for the courts.

The job is also one that is financially very rewarding. Going to adjudication is no longer a 'cheap' option and this can deter smaller claimants from using adjudication. They may be best served by going to court.

Safeguards for the parties

One of these is 'natural justice' which, in a nutshell, means each party having a fair hearing, i.e. the opportunity to put forward their case and/or responding to the other party's. It also means the adjudicator acting impartially as between the competing parties, i.e. showing no favouritism to either.

What happens if this goes wrong?

An adjudicator's decision reached contrary to 'natural justice' does not have to be complied with and will not be enforced by the courts.

So, in my previous example, Party A would not have to pay Party B the £1m. In addition, one or both of the parties may ask the adjudicator to repay some or all of the not insignificant amount of fees they have paid him. That said, many adjudicators include a provision in their T&Cs that says they can keep their fee even if their decision is unenforceable. This is a bit like saying, "I painted your wall red when you wanted it green but I don't have to repaint it green and I can keep the £200 plus material costs and VAT you paid me. Cheerio". This is a point to consider when you get the adjudicator's T&Cs.

What went wrong in Corebuild?

The adjudicator decided the defendants had to pay Corebuild £80,023.82 because they had wrongly terminated their contract with Corebuild. This wrongful termination meant the defendants had been in repudiatory breach of the contract which is not something one wants to be guilty of because it can adversely affect your wallet.

The defendants did not pay Corebuild who sought summary judgment, i.e. a court order that the defendants pay the £80,023.82 plus interest and legal costs. Sadly for Corebuild the court refused to enforce the adjudicator's decision.

The defendants objected to paying Corebuild on a number of grounds. This was (in summary) because:

Save for the non-crystallisation point, this is very much a defence based on a breach or breaches of natural justice by the adjudicator.

This meant the adjudicator's decision was "unenforceable by reason of a material breach of the rules of natural justice".

I suspect significant sums of money have been spent by both parties who are, in terms of resolving their dispute, back to square one. This is not a good advertisement for adjudication save that this case illustrates, once again, the importance natural justice has to play in the resolution of disputes.

As for Messrs Trump and Bolton, I am not convinced they share this view of the importance of natural justice in the resolution of disputes.

Donald Trump has fired his national security adviser, John Bolton, in a pair of tweets in which he laid bare searing internal divisions within his inner circle, saying he had “disagreed strongly” with his top aide. 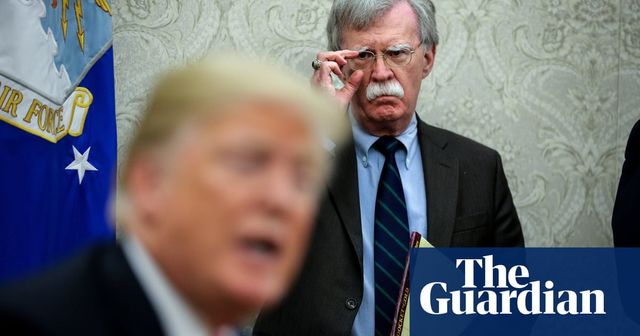