The COVID-19 pandemic is causing all manner of problems for the Construction Sector, including whether sites can stay open or not.

On the one-hand the UK Government says everyone, save for a limited number of groups, should stay at home and when we do venture out (for food, medicine and/or a daily run, cycle or walk) we must all 'social distance' by keeping 2m apart. On the other hand it says construction sites can stay open provided the workers social distance while on site. This assumes they can, in London, get to site without using crowded public transport. It is also difficult to understand how some construction activities can be deemed to be vital to fighting the COVID-19 pandemic. One might say that the advice to date is far from clear or, as Asterix and his loyal friend, Obelix, might exclaim "highlyconfusearix!".

My use of the term "frustration" is not a reference to the weekly calls I get from clients fed-up with the delays on site, the two-page list of snags when the building is said to be complete (in one case the list of 'snags' included to entire BMS system for a hotel), or the increasing cost of the works, but rather the recent rise in claims that the building contract has been 'frustrated' due to COVID-19. As a consequence, one of the parties says it is 'discharged' (released) from having to continue with the contract, i.e. "come on lads, we are off and here is my final invoice Mr Client. Cheerio".

Generally, my advice is that such a claim is "highly improbablerix" if not "complete nonsenserix" because:

(1) The vast majority of building (and civil engineering) contracts will provide for what happens in the event that the works on site are delayed due to supervening events such as COVID-19 and/or changes in the law, e.g. the Coronavirus Bill currently passing swiftly through Parliament. Therefore, while the works may take longer to complete and cost more than had been anticipated at the start (the latter seems to be the norm, in any event) this does not mean the parties' contract has been 'frustrated'.

(2) Again, the vast majority of building contracts are not dependent on a particular individual or business carrying out the works. Indeed, the JCT forms expressly provide, for example, for what is to happen if one of the parties becomes insolvent. The Employer is entitled to employ others to complete the 'Works' which, in itself, demonstrates that the identity of the Contractor is not vital to the existence of the building contract. In addition, if one reads a standard form contract it focuses on the 'Works' being completed, not on who is carrying them out. Of course, if the building contract included an obligation to engage a particular named artisan to carry out a item of work, his or her demise could 'frustrate' that part of the overall 'Works' but it would not frustrate the whole of the contract.

(3) While the ambit of the doctrine of frustration may have been extended, it still requires an event so fundamental as to be regarded by the law both as striking at the root of the contract and as entirely beyond what is contemplated by the parties when they signed on the doted line. It, the post contract event relied upon, must also make the continued performance of the contract impossible, illegal or radically different from what was contemplated. I would suggest that delay and/or increased cost caused by the COVID-19 pandemic and/or UK Government guidance, does not do any of this in the context of building contracts that provide for what happens in such circumstances, e.g. Relevant Events for force majeure and/or the exercise of statutory powers.

(4) Of course there are exceptions and building contracts have been held to have been frustrated where there was a established relationship between the Employer and sole trader Contractor (Atwal v. Rochester (2010)) and where the existing building was destroyed by fire (Appleby v. Myers (1867)). Today, however, the standard forms expressly provide for what is to happen in cases of the building and works being destroyed by, for example, fire. As for sole traders, this situation is unlikely to arise save in building contracts for private homeowners.

Before I leave the exceptions, I would note that Brexit (remember that?) did not frustrate a 25-year lease by the European Medicines Agency (Canary Wharf v. EMA (2019)). This decision illustrates how difficult it is to succeed with the frustration argument which accords with the general approach of the English courts, namely to uphold the parties' contract even where one party realises it has made a very bad deal, including a 'nightmarearix'.

(5) Finally, even if one succeeds with the frustration argument the parties are only relieved from future performance. In simple terms, the Contractor remains liable for the works done and is to be paid for them but that is it.  The Contractor cannot, as I have also seen, claim loss of profit etc on uncompleted works and such a claim is a 'completetryonarix'.

I say a fond farewell to Albert Uderzo. I enjoyed and continue to enjoy reading of the exploits of Asterix and his friends in frustrating (and they do) Julius Caesar and the might of the Roman Empire. My favourite character was and always will be Obelix. This is probably because most ex-front row forwards can self-identify with that mild mannered and highly intelligent Gaul.

As for claims that COVID-19 has frustrated the building contract, I suspect I will continue to advise clients to respond as might Chief Vitalstatistix, namely that sounds like a load of Cacofonix!

Asterix: a world of joyful innocence born in the aftermath of war Goscinny and Uderzo’s cheery comic-book parodies reflected none of the real horror of Roman imperialism – and painted an irresistible portrait of postwar Europe 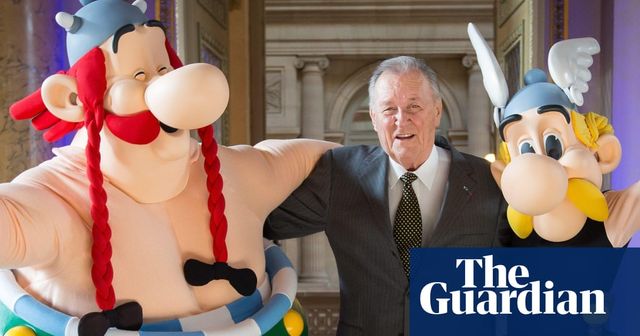 It's @holland_tom on Asterix: a world of joyful innocence born in the aftermath of war https://t.co/NxGkoOkc1I