Well, we can all dream and the best of luck to our four-legged friends in the fight against Japanese knotweed.

The late and very eminent construction barrister, Ian Duncan Wallace QC, was a human sniffer dog when it came to the JCT 'standard forms' of building contract. His "trenchant style and unrivalled familiarity with the relevant authorities ... could not be ignored" (The Times, 15 January 2007). It has been said that he referred to JCT forms as appearing from the corners of dark, smoke-filled rooms or, to bring it up to date, from the shadows of designated apple & cinnamon scented vaping zones.

Whether or not the smoke-filled rooms view is correct, there are many JCT provisions a sniffer dog might want to bark about. Here are just two:

What is this all about? What function does it truly serve or, perhaps, who's interest (Employer or Contractor) does it serve?

For those of you who cannot readily remember what clause 2.29.1.2 says (and similar wording appears in other good JCT contracts) here it is:

.1 the Employer has issued a Non-Completion Notice for the Works ...; and

.2 the Employer has notified the Contractor before the due date for the final payment under 4.24.5 that he may require payment of, or may withhold of deduct, liquidated damages,

the Employer may, not later than 5 days before the final date for payment of the amount under clause 4.24 [Final Statement and Final Payment], give notice to the Contractor in the terms set out in clause 2.29.2."

To the sniffer dog, the effect is that in order for an Employer to withhold/deduct (are these different in real life?) liquidated damages it must:

If the Employer (or more likely his project manager) does not do this, a deduction will, on the face of the JCT contract, be a breach.

Put simply, how many bits of papers must the Employer serve as a pre-condition to deducting liquidated damages? I would answer this by saying, we don't need as many as required by the current suite of JCT contracts, especially the one tucked away in clause 2.29.1.2.

2. Let's solve S&T v. Grove until the Supreme Court does

We all know what the Court of Appeal decided, i.e. if the Employer has not served the payment notice and 'pay less' notice by the correct date the Contractor is entitled to its money even if this is rather (possibly substantially) more than he is entitled to. And we have all been following the ongoing legal debate about how the Employer can or cannot recover the over-payment, i.e. where is the express contractual provision requiring the Contractor to repay the Employer?

The current suite of JCT contracts don't (save at the final account stage, e.g. 4.24.2 in JCT DB 2016) provide for the Contractor to, in effect, repay any over-payment. Therefore, a solution is to learn from the NEC forms and include wording based on, for example, clause 51.1 of NEC3:

One could 'sniff' out other provisions such as clause 2.26.8 and 'exceptionally adverse weather conditions' (what does that mean? Where is the JCT definition?) but 'time's winged chariot' prevents me.

Concluding our sniffer dog theme, I read that a new edition of Hudson's Building and Engineering Contracts is to soon to be released. Four successive editions of this scholarly publication were edited by the late Ian Duncan Wallace. I will, when I get my hands on a copy of it, be keen to find out if the latest edition continues to hold so-called 'standard form' building contracts to account. Will the sniffer dog be alive and barking or confined to its kennels? I do hope it is the former.

A new start-up company has trained dogs to be able to sniff out Japanese knotweed on construction sites up to 40 times faster than it takes humans to detect it. 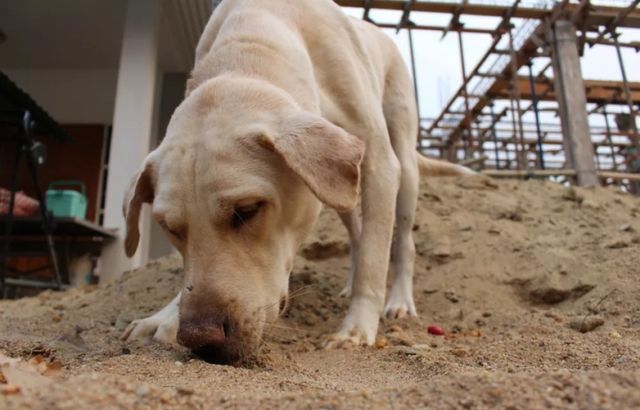 A new start-up company has trained #dogs to be able to sniff out Japanese knotweed on #construction sites up to 40 times faster than it takes humans to detect it. Knotweed causes issues on site, being a stubborn plant to remove.