The latest economic data for the construction sector is not looking too rosy. Many of the broadsheets have reported a downturn in output when compared to the same time last year. The article in yesterday's Independent on the latest set of figures from the Office for National Statistics (ONS) is no exception.

If one studies the ONS report it does give rise to concern. However, it also says that despite the month-on-month decrease construction output in February 2018 remains 24.2% above its lowest point in the last 5 years in April 2013. In addition, the ONS reports that following strong growth throughout the majority of 2017 and into January 2018 new private housing continued to grow in February 2018, increasing by £232m. This is based on a comparison between the three-month period December 2017 to February 2018 with the previous three-month period. In line with this, following a fall in January 2018 private housing new work increased by £42m in February 2018 and public housing new works grew by £9m. So it is not all bad news.

The biggest fall between January 2018 and February 2018 was in the value of new infrastructure which decreased by £152m. But (least we forget) Carillion entered liquidation on 15 January 2018 which unsettled the sector. In addition, the ONS reports that infrastructure actually grew by some £60m in the quarter December 2017 to February 2018 compared to the previous quarter (September to November 2017). Again, not all bad news and it will be interesting to read what the ONS's next report says now we are in the 'post Carillion' world.

If a 'correction' in the construction sector is to come then we should perhaps keep in contact with our architect friends. There is a saying that the construction sector is the 'first in, last out' of a recession. However, it is also said that architects are the 'first to be let go and last to be hired' when hard times hit and good times return. Therefore, it is interesting to read that the RIBA's Future Trends Survey: December 2017 (which asks its members to forecast future workloads 3 months ahead) shows an overall increase of 8% increase. Architects in the Midlands and North were far more positive than those working in London. So this data from the RIBA is positive too.

Everything might not be perfect and the construction sector may be experiencing a period of uncertainty but the 1980's property crash happened at a time when mortgage interest rates were at a bargain 12%. Then in the late 1990's they were at a knock down price of 6-7%.  Far less benign than today.

Based on the current construction sector data it is perhaps a little too early to agree with Dad's Army's private Frazer and cry out, "we're doomed, all doomed!"

Finally, the Independent's article refers to the snow in February, an important point for many construction contract administrators/project managers. Before you grant your contractor its extension of time for bad weather please do check what your contract actually says because, by example, the JCT forms say the weather must be "exceptionally adverse" not just "adverse". If in doubt as to what "exceptionally adverse" means then do take legal advice because it could save you and your client a lot of time and money.

Construction sector output was 3 per cent lower in February than a year earlier, marking the largest annual fall since March 2013, an official survey found. On a quarterly basis, construction output fell 0.8 per cent in the three months to February 2018, driven predominantly by the continued decline in repair and maintenance work, the Office for National Statistics said. 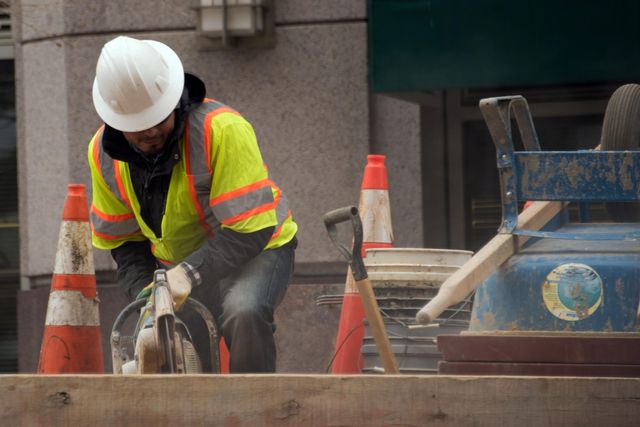